KENNY WALLACE AND THE QUEST FOR 900

American Ethanol and Family Farmers spokesman Kenny Wallace will be making his 898th career NASCAR ®start tonight from the Richmond International Raceway. He will be racing in the No. 29 American Ethanol Toyota Camry, on the track where he boasts three wins, 18 top 10 finishes, and 432 laps lead. Then catch him next weekend at the Chicagoland Speedway making his 899th and then 900th start, both with support of American Ethanol through IL Corn. 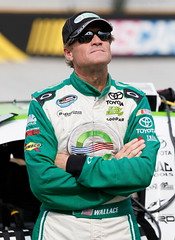 Nine hundred career starts is quite the milestone, with only a handful of drivers crossing that plateau. Wallace, who has raced the better part of four decades, has had an impressive career across all NASCAR® circuits. His start tonight will also mark the 1,000th Nationwide Series™ race in its 32 year history. Wallace already holds the record of 541 Nationwide Series™ starts.

For the last four years, Wallace has been promoting farmers and ethanol to his hundreds of thousands of fans. This work is a vital part of the overall imaging effort put forth on behalf of corn farmers by IL Corn.

Support Wallace on his way to his 900th start by using the #Roadto900 hashtag on your social media posts. Follow Wallace on Twitter at @Kenny_Wallace.

"I am so excited to be making my 898th NASCAR start at one of my favorite race tracks, Richmond International Raceway, with a company who has supported me now for a long time, American Ethanol,” said Wallace. “Look for the No. 29 American Ethanol Toyota Camry to be running upfront under the lights on Friday night."

Prior to suiting up for American Ethanol, Wallace visited the Illinois Corn Growers Association exhibit at the recent Farm Progress show where he advocated for the use and adoption of higher blends of ethanol.

Wallace told the crowd, "You're part of the process of making this E85 fuel, so put it in all your pickup trucks. There's plenty of E85 pumps throughout the state of Illinois. So I grow it, I use it. So you grow it, you use it. And that's our message here."